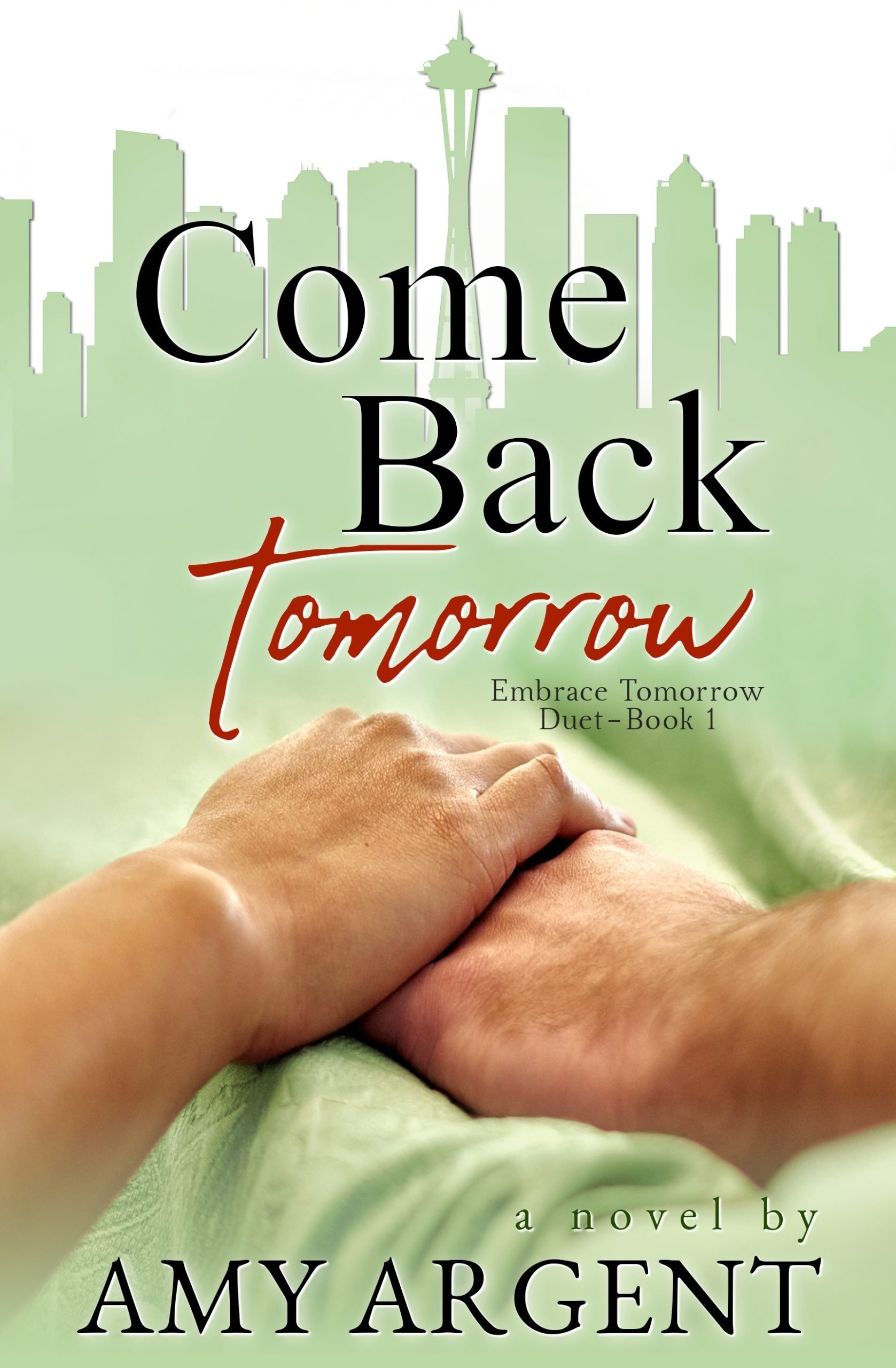 Meet Will Everson.
At twenty-nine, he’s already beaten cancer twice, but when it comes back a third time, he can see the writing on the wall.  Estranged from his family and believing he’s a burden to his friends, Will decides to go it alone and surrender to his fate.
Tori Somerset is a clinical psychologist with an unusual hobby—befriending terminal patients with no friends or family to make sure they don’t die alone.
When Tori meets Will, he’s a mystery—where are his friends and family?  Why has he given up on living? And why is he keeping her at arm’s length?  Tori is certain she can help Will make peace with his decisions, but first she has to convince him to let her in . . . before it’s too late.

eBook: $3.99
Available at these retailers:

Paperback: $14.99
Available at these retailers:

Praise for Come Back Tomorrow:

“This is the kind of book that will change your life once you start reading it!” – Words of Wisdom….from The Scarf Princess Blog

“This book is an experience that is both realistic and beautiful and I was truly sad when I got to the last page. This is one of the best books of the year and should not be missed!” – Comfy Couch Book Reviews

“A highly impressive debut novel! Amy Argent has set the bar astronomically high with Come Back Tomorrow, which is why it gets five stars, and has made Whatever Tomorrow Brings quite highly anticipated.” – Dog-Eared Daydreams Blog

“Ms. Argent has created a beautifully crafted tale, weaving together the ugliness of life (cancer, bad family relationships, poor self-esteem) with the beauty (good friendships, kindness, those who help) that hurt my heart but brought hope as part one ended. I cannot wait to read the conclusion!” – Laura, Amazon Reviewer

“With Come Back Tomorrow, Ms. Argent has created such a wonderful and realistic debut! Her writing will touch your heart in so many ways. I can’t wait for more in book two, Whatever Tomorrow Brings!” – Theory of A Dreamer Book Blog

“Come Back Tomorrow is an amazing story that will have you laughing, crying, and turning pages as quickly as possible.” – Julie, Amazon Reviewer

Does music enhance your reading experience?
Check out the Embrace Tomorrow soundtrack!

Want to meet Will and Tori?

Not wanting to invade his privacy, I knock softly but hear no response. I don’t want to knock hard enough to wake him if he’s sleeping, so I open the door just a bit and peek in. If he’s asleep, I’ll come back another day.

Angling my head around the door, I draw in a sharp breath. Even as sick as he is, William Everson is stunning. His hair is a mass of brown, wavy locks strewn with brassy red highlights, made even brighter by the fluorescent hospital lighting. It’s relatively short on the sides but long on the top and hangs down onto his forehead. He has bushy eyebrows that match his hair and a chiseled jaw that squares strongly in the front. His shoulders are broad, and although his hollowed cheeks tell me he’s underweight, clearly he has a muscular build. Oh, wow.

Completely lost in my ogling, I push the door open a little farther, and it squeaks loudly. He whips his head up, and the greenest eyes I’ve ever seen meet mine. I start breathing again with a gasp and shake my head. I smile at him tentatively, and what happens next blows me away.

His gorgeous face breaks into an absolutely incredible smile. His eyes seem to turn an even deeper green, and small laugh lines appear at the corners as his cheeks pucker into a boyish grin. His full pink lips narrow to reveal perfectly straight, white teeth, and the spread of his cheeks fills in the hollows so that if not for the circles under his eyes, I don’t think I’d even be able to tell he’s sick.

The smile stays there as he looks me over. He’s waiting for me to say something.

I shake my head again and take a few more steps into the room. “Hello, Mr. Everson.”

“Hi there,” he responds lazily, his head rolling a little to one side.

Looking closer, I notice the glassiness of his eyes. Exactly how much morphine has he had today? “My name is Tori. Would you mind some company?”

“If by company, you mean you, I wouldn’t mind at all.” His eyes rake over me in a way that makes certain parts tingle.

I clear my throat and sit in the chair at his bedside. “How are you feeling today, Mr. Everson?”

He grins at me again, his tongue poking out between his lips to moisten them. “Please, call me Will.” Then his brow furrows adorably. “What did you ask me?”

I can’t help but chuckle as I realize what kind of conversation this is going to be. He’s seriously high from the morphine. “I asked how you were feeling today.”

“Right . . . sorry. Well, I think I was having a crappy day, but then the nurses gave me this.” He holds up the button of the infusion pump for the morphine. “And then you came by. So at the moment, I’m feeling pretty good,” he says with a grin.

I can’t help but grin back at him, and I also can’t bring myself to ask him any serious questions. He’s in too good a mood, and I don’t think I would get any straight answers anyway. “I’m glad to hear that.”

“You’re . . . Never mind,” he murmurs, blushing to the roots of his hair and looking away.

“What were you going to say?”

“I was going to say . . . you’re pretty, but it didn’t seem like a good idea for some reason,” he answers, looking perplexed.

He closes his eyes, then opens them again slowly.

“Hey, I think you’re getting a little tired. Why don’t you rest now, and I’ll come back and see you tomorrow,” I suggest, moving as if to stand up.

He grasps my hand, surprising me. His fingers are warm and soft, and my skin tingles underneath his fingertips.

I look into those impossibly green eyes, now tinged with sadness.

“Will you stay? At least for a few minutes? You’re the first visitor I’ve had,” he says softly, and I remember why I’m here. Oh, damn.

“Of course. You close your eyes and rest, and I’ll stay right here.”

“Thank you,” he whispers as his eyes fall closed, finally succumbing to the pull of the morphine.

I sit there for a while, just watching him sleep. He’s gorgeous. Jesus Christ, Tori—he’s dying. You’re not supposed to notice how good-looking he is! But I can’t help it. He’s one of the most handsome men I’ve ever seen despite the obvious signs of his illness.

And I have so many questions, questions that don’t even come to mind for elderly patients. How did he end up in this place, seemingly at the end of his life, at such a young age? Where are his family and friends? Is he keeping them away somehow, or is there truly no one who cares about him? I find the latter very hard to believe. Hell, I’ve known him for all of five minutes, and I can already see why Jenny is taken with him. I can feel his pull on me, too, even though we just met.

He seems pretty easygoing. Maybe it won’t be too hard to get to know him and find out where the people who care about him are. But God, he’s so young. This is so . . . different from anything I’ve ever done before. I’ve never befriended a terminal patient who wasn’t elderly. Can I really do this? I already suspect this will be the hardest “terminal” friendship I’ve ever made, but as I watch him sleep, I know I can’t turn my back on him now. I already told him I’d come back tomorrow.